Joshua Park was formerly called Irondequoit Plaza Park. It was renamed in 2005 when a young boy, Joshua Rojas, passed away during a soccer practice.  At the time, it was unsure why this happened.  The family describes that 18 weeks after this tragedy, a rare genetic defect was discovered that proved to be the cause of death.  Since 2005, the family has set up a foundation where families can get support and help further the research into Josh’s genetic defect.

I could not find any area designated for eating at Joshua Park.  Unfortunately, Irondequoit really missed the target by not including one.  There are park benches sprinkled throughout the park, but not a single picnic table or barbecue in sight.  Interestingly enough, the absence of any of these standard items did not stop people from eating in the park!  There were at least two groups of people that had found a nice spot to spread out a blanket and share a meal. 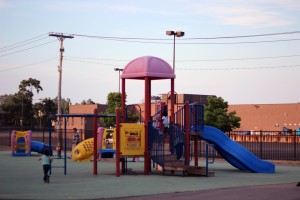 There are quite a few play areas at Joshua Park, not least of which are the three play structures.  The largest of the three is a pretty standard structure that most parks have.  The other two are specifically for young kids under five, the smallest for kids under three. At one end of the park, there are two horseshoe courts and two bocce ball courts.  The bocce ball courts looked to be very poorly maintained, possibly because it is underused.

It is important to note that the area surrounding the playground structures was somewhat littered with garbage and some broken glass.  Shoes should be worn at all times! 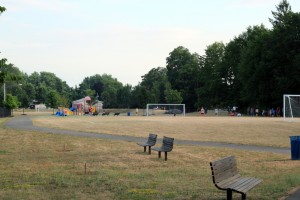 The big attraction to Joshua park has to be the two beautiful soccer fields. When I visited the park both fields were in use, although only group was playing soccer!  The other group was playing kickball…I was extremely jealous and wanted to join in. If you’re looking to play some pickup games of soccer (or kickball) this would be a great place to organize the game.