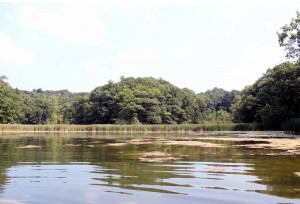 Monroe County’s newest park, Devil’s Cove Park is perhaps the most elusive of all the Monroe County Parks.  It is located on the east shoreline of Irondequoit Bay and situated (appropriately) in Devil’s Cove.  The park is only accessible by boat (unless you happen to live on a bordering property) and is obviously not visited by many people.

We had to take a canoe out to the park and launched from Irondequoit Bay West park from the public boat launch. It was approximately 2.5 miles and 40 minutes of hard paddling to get up to the Cove.

Being a beautiful sunny day, we had to compete with a ton of speed boats in Irondequoit Bay. We spent half of our paddling time turning the canoe into the wake of passing boats so we wouldn’t flip over, and almost did two or three times!

Shortly before we got to Devil’s Cove, we passed an area between the small island and the east shore that was extremely shallow. The water level was probably 3 feet or less–and people were really enjoying it! Floaters, boaters, waders, swimmers, all took advantage of the sun-warmed shallow water.

When we got to the short of Devil’s Cove we realized that that shallow water indicated low tide in the Bay. We weren’t able to get all the way to solid ground because there was about 20 feet of mud that was impassible. We climbed out, through the mud and made it to land, but that really soured our first experience of the park.

Devil’s Cove park is completely undeveloped. Besides the cool factor of being able to say you’ve been there, there is essentially no reason to visit. But hey, it’s a County Park and could totally turn into something amazing and possibly exclusive in the future.