Similar to the other park in Rush NY, Stoney Brook Road Park has a unique purpose in the town. Although it’s unclear precisely when the park was officially started, in 1978 the Town of Rush received a Land and Water Conservation Grant of $15,000 to develop the park. After five years, it was completed in 1983.

Not every park in Rochester has what we consider to be the three essential features of a park: an eating area (picnic table, barbecue), a play area (playground, swing set) and some sort of open field or athletic field. Many parks have just one or two, but usually what they do have is pretty nice. There’s some amount of thought that goes into creating a park; when all three areas exist that means people were thinking about maximizing the usefulness of the park. 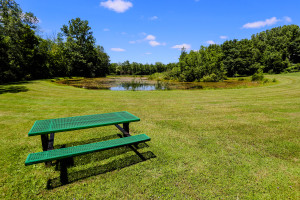 At Stoney Brook Road Park, all three exist–that’s a good thing! The eating area is perhaps the nicest of all. There are picnic benches both on the east side of the pond and underneath the shelter. A single barbecue stands between the picnic tables near the road and another exists in the wooded area–not a short distance from the shelter.

There are also a few picnic benches set up on the road side of the pond. For a lunch spot or a picnic in the park, this would be my preferred spot! 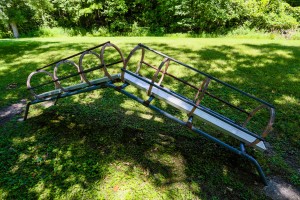 The play area is in sore need of upgrades and repairs. The large swing set near the shelter has spaces for six swings, but only five exist. The other, smaller, two-swing set needs repairs to both seats. Lastly there is a climbing structure of sorts in the wooded area that would appear to be original to the late 1970s park construction.

The open field has on either end what looks to be a goal post, perhaps a football upright or a make-shift soccer goal. There is also a spot for a baseball diamond although no bases or pitching mound exists. One has to wonder when the last game might have been played here.