Home/Posts/Town Parks/Greece Parks/Badgerow Park North
Badgerow Park North
George W. Badgerow held the office of Town Supervisor in Greece from 1965 to 1969.  As the town of Greece is wont to do, they named a park after him.  The entire park is about 66 acres, one of the larger parks in Greece.  Here we’ll be reviewing Badgerow Park North and after a future visit, the Badgerow Park Nature Trails.  It is interesting that, while there is a single boundary that encompasses the two parks, there are two very different and distinct parks. 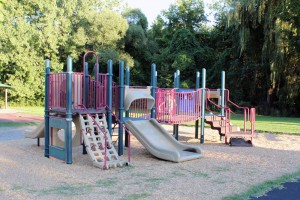 It would seem that this playground structure is a bit of an older model when compared to some newer structures such as in Sawyer Park. I wouldn’t hesitate to call it in great condition, it just doesn’t display the bright, vivid colors of a fresh installation.  Similar to Forest Hills Playground, this play area features three rockers and even includes the two-seater Jet that is actually pretty fun to ride! It’s important to note that while this park does have a swingset, it only includes two toddler swings.  There aren’t broken or missing regular swings, the swingset only includes the toddler ones.

There is a large tennis and basketball court.  An older couple was playing tennis while I was there and seemed to be enjoying themselves.  The cage surrounding the tennis court is quite high.  The basketball court looks somewhat dilapidated. I’m guessing it doesn’t see much use. 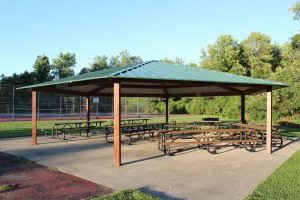 The shelter at Badgerow Park North is pretty nice.  There are six 12-foot picnic tables and a double barbecue that are available to reserve.  .  Based on twelve-per-table seating, the capacity for this shelter is 72.  The shelter itself is 35′ in diameter.

There was another barbecue off to the side of the shelter, presumably for another eating area, but there was no picnic table there.  I’m curious to know where the table went.  Sadly, this diminishes the overall quality of the Badgerow North eating area as there is only one legitimate area to cook and eat. 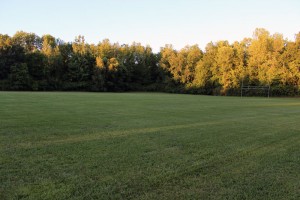 There are two athletic fields in this park.  One is a baseball diamond with an outfield fence distance of 206 feet.  The other, just beyond the baseball field is a football field.  The official park website does describe it as either a soccer or football field, but I think it’s important to note that there are football uprights that make this distinctly capable of hosting a regulation football game.  There were faint lines on the field, perhaps leftover from last season.  I was amazed at how beautifully situated the field was.  On three sides is dense forest and the third has a few trees to separate it from the baseball field.  I can’t imagine this field sitting dormant for many days out of the week.  Kudos to the town of Greece for providing such an amazing field for its residents. 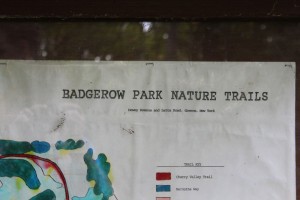 On a future visit, Rochester Parks will walk the trails and give an overview of their quality and anything of particular import.  The included picture gives just a hint of what the trail map looks like and will be fully updated when we walk the trails.