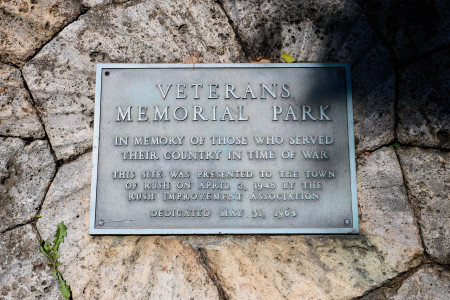 The park was presented to the Town of Rush on April 2nd, 1948 (two and a half years after the end of World War II) by the Rush Improvement Association. This group, “…was formed with the goal of acquiring the former mill site to create a park on both sides of Honeoye Creek.” (Mee 2014) 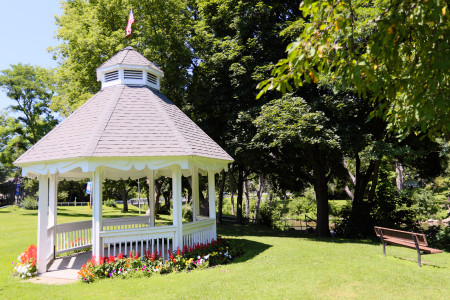 The park itself is very small. Taking up just three quarters of an acre, Veterans Memorial Park is one of the smallest parks in Rochester NY. Beyond the memorial plaque pictured above, the park mainly consists of places to sit.

There are a few benches, and two overlooks of the Honeoye Creek. The first looks directly at the waterfall and the second is a large patio-type concrete structure.

Lastly, there is a large white gazebo situated on the east side of the park. It is about 20 feet in diameter and surrounded by some great-looking flower beds. There are two plaques inside of it: one in memory of Joe Hoh, the other is a 175th Anniversary gift from the Rush Lions Club.